The story of “Shorty the Longbed”

People ask me all the time if I bought the truck for the campaign so I thought I would tell you the story of Shorty the Long Bed.

I like to have a truck to do yard chores.  I haven’t had one in years and then one day I saw this truck advertised by a friend on Facebook.  It was much bigger and older than I needed or wanted, but I thought I would go check it out anyway.

I opened the door to go on a test drive and was transported back to my childhood.  The cab looked, felt and smelled just like the truck my grandfather had. In this truck, I spent hours with him driving to and from his house visiting my grandparents.

My grandfather, Richard Franklin Jennings, was a cowboy at the Matador Land and Cattle Co in northwestern Texas. He was actually a lot of things, but being a cowboy was the thing he was most proud of.

Richard Franklin Jennings was a small man who wore a big Stetson, work boots, and a Levi demin jacket with shearling. All the time.  When he married my grandmother she made him stop wearing the Stetson in bed.  His nickname was Shorty. He had a sense of humor that could tell a simple story and have you doubled over to get a breath.  I loved him. We all loved him. Actually, we adored him.  And he loved us. It was a two-way street so there wasn’t any ego to it.  Just lots of love and funny stories for everyone. 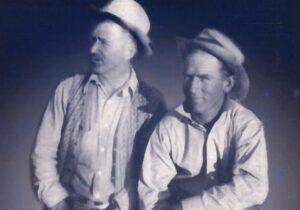 Renee’s grandfather, on the right.

He would make a three-hour one way drive to pick me up when I was little. I would perch in the seat next to him. These were the days of no seatbelts and I would slide around some, but I always felt safe. He would have the window open in the summer. That was our air conditioning. We would yell at each other over the sound of wind in the cab. We would stop for cool drinks or ice cream on the way back just to get some relief from the heat.  I always questioned his choice of ice cream. “Why, oh why, Granpa, would you choose vanilla, when you could have chocolate?”  He’d just say, “Well, now. I don’t know.” With a sly grin that made me feel like maybe I was the one missing out.

One time in the winter the truck broke down on the way to their house. This was before cell phones. Grandma was expecting us and we were not going to get there on time.  There was no way to contact her. Shorty had been trained in auto repair and fixed the truck on a regular basis, but somehow, he couldn’t get it started. It was growing dark. He gathered his things, locked the truck and picked me up. Then he stuck out his thumb. In 15 or so minutes, someone stopped to pick us up.  We got into a strange truck. Shorty had one arm around me on his lap and one hand on the door handle.  Turns out this old boy worked at the Matador Land and Cattle Co a few years after Shorty.  They told long tales and laughed all the way home.

Shorty wrote down his memories of his time at the Matador at my mother’s urging.  I like to read it. It’s written as if he is telling you his stories and I can hear his voice again.

As I was sitting in the cab of the F-150 all those memories flooded back.  I took it for a test drive, but no matter how it performed I knew I would buy and for the asking price.  I’ve loved it ever since.